A new Chairman assumed office in July 2022, following the end of tenure of the second Chairman. He is Mr. Kocou Laurent Rodrigue TOSSOU, an engineer by profession.

Mr. Laurent Tossou, joins the two other members of the Regulatory Council composed of Dr. Haliru DIKKO (Economist) and Mr. Aly Mar NDIAYE (Engineer), who assumed office in May 2017. 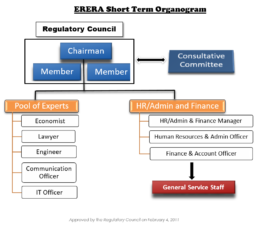 This organizational arrangement, designed for the first three years of ERERA’s operations, will be progressively reinforced according to the evolution of the regional market and the development of activities.

ERERA Regulations provide for the creation of consultative organs as regulatory instruments to assist the Regulatory Council in decision-making. The following organs have been functional so far:

Consultative Committee of Regulators: This committee was established in December 2011.

Consultative Committee of Operators: This committee was also established in December 2011.

Working Groups: Two working groups were created in May 2015 (1) on data collection, to enable the efficient collection of data of the power sector in West Africa and (2) on Programme planning, to promote consultation on the work programmes of ERERA

Regional Electricity Market Rules (RMR): This is a set of rules which governs the trading of all electricity that flows across international borders between participating countries through the Interconnected Transmission System of the West African Power Pool (WAPP), in compliance with the standards and procedures defined in the “Operation Manual for WAPP Interconnected Power System”. Developed by WAPP, the RMR was approved by ERERA (Resolution N°005/ERERA/15 of 18th August 2015)

WAPP Operation Manual: The objective of this document is to ensure, by means of technical policies, that all the interconnected power systems of the WAPP operate the interconnected Western African network efficiently and effectively and that they participate equitably in the obligations and in the benefits resulting from the Interconnection. Developed by WAPP, the WAPP Operation Manual was approved by ERERA (Resolution N°007/ERERA/15 of 29th September 2015