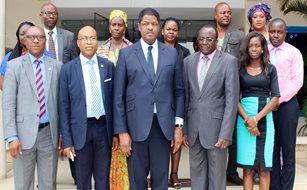 President of the ECOWAS Commission, Marcel Alain de Souza, visited the offices of the ECOWAS Regional Electricity Regulatory Authority (ERERA), on 11th August 2016 in Accra, Ghana. It was President de Souza’s first visit to ERERA since he assumed duty in April 2016.  He was accompanied by the Director of Political Affairs, Dr. Remi Ajibewa. He made the visit on the sidelines of the tripartite United Nations, African Union and ECOWAS high-level mission to Ghana on the 2016 elections. During the visit, President de Souza described ERERA as an important institution of ECOWAS, tasked with contributing to finding solutions to the energy crisis in West Africa.